There are a few important legal requirements that must be observed when applying - "fitting" - tinting film to a car.

ABG certification by us as manufacturer 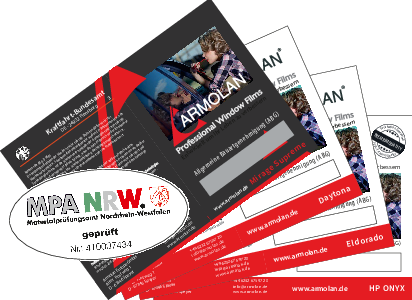 Our tinting films, which we have had tested and certified for use in motor vehicles by the Material Testing Institute in Dortmund, are certified with a general type approval (ABG) of the Federal Motor Transport Authority according to § 22a of the Road Traffic Licensing Regulations (StVZO) in the version of 26.04.2012 (BGBl I p. 679). ) in conjunction with the Ordinance on the Testing and Approval of the Construction Type of Vehicle Parts and their Marking (FzTV) in the version dated 12 August 1998 (BGBl I p. 2142).
The test mark is inseparably lasered into the film at a distance of 30 cm in length and approx. 5 cm from the edge. When installing the film, it must be ensured that at least one visible ABG print per window segment is present on the installed film and that it is clearly recognisable or readable.
Together with the printed general terms and conditions certificate, which is supplied by us with every film, there is no need for TÜV acceptance or registration after the film has been attached to the vehicle, as we as the manufacturer already supply proof of approval for road traffic on the basis of the test certificate. This document must be carried in the vehicle and must be presented accordingly in the event of an inspection.

Which windows of the vehicle can be wrapped at all?

The sun protection films may only be applied to the inside of vehicle windows made of single-pane safety glass that are not important for the driver's view. It is also not permissible to apply the film to both sides of the windscreen. The films may only be applied up to the pane holder or pane bonding. It is not permitted to jam or connect the film to the windscreen frame or the rubber seal. However, such an application is permissible if the film is continuously cut in the area in front of the window holder, window frame or window bonding. The use of single-pane safety glass on emergency exits of buses is permissible. 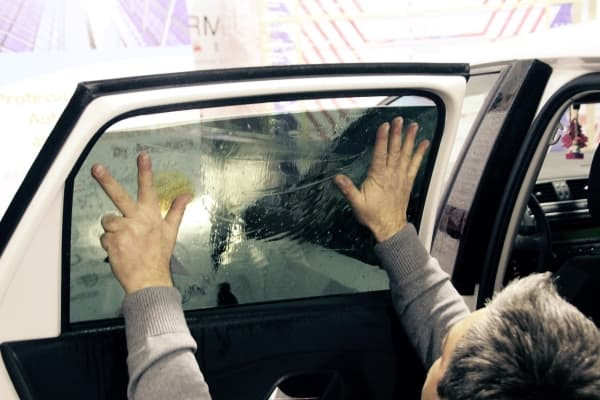 Which car windows must not be laminated?

The windscreen, and the two front side windows - are important for the driver's view - and may not be foiled under any circumstances. If the rear window of the vehicle is provided with a tinting film, this may only be done if the vehicle is equipped with a second exterior mirror.

Are the brake lights on the vehicle allowed to be foiled in the rear window?

A so-called "third" brake light or brake lights, which are mounted inside the rear window, are excluded from the film. The brake lights must not be impaired by the application of the film on a rear window; the tinting film must be cut out in the appropriate places for this purpose.

If the legal requirements in this regard are not complied with, the vehicle's operating licence on public roads will expire!